Last summer I replaced the basic CFL bulb in the garage with a 100w daylight LED bulb. It helped but it was still lacking compared to what I had in the garage at my old house. A few months ago my neighbor picked up a four foot LED shoplight from Sam's Club to mount above his workbench. I'd seen them before in the store before but seeing the light output in his garage sold me on it. This weekend I finally got around to buying and installing a few. The difference is absolutely amazing. 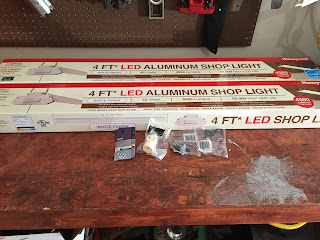 In the picture above I also bought longer hooks just in the case the ones that were included weren't long enough to go through drywall and "bite" enough into the stud but I didn't need them.

Installation was easy. I used a stud finder to find the studs in the ceiling, drilled pilot holes for the hooks, screwed them in and mounted the lights. I mounted one in the front and one in the rear centering them as best I could. Using the light socket adapter greatly simplified installation as instead of having to hardwire them in I just needed to plug them in. They also work with the existing light switch this way. The plugs on the lights are grounded so I needed the three prong to two prong adapters in order to plug them in. The cords aren't very long so I used one extension cord as well. 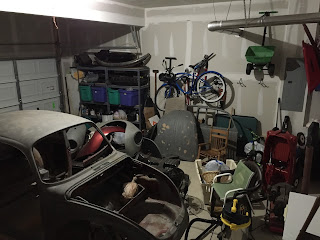 Before. (Excuse the mess. Putting up a shed to get a lot of this stuff out of the garage is next on my list for the spring.) 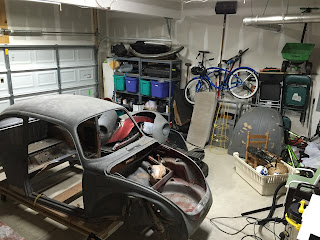 After. As usual, the pictures don't totally do it justice but even my wife was impressed with the difference.

Crossposted from my house blog.
Posted by Jeff at 1:14 PM No comments: