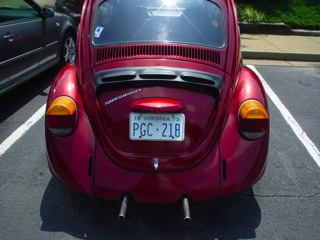 The Bug with original 1973 Virginia license plates just after I registered them for use on it.

For two weeks I drove the Bug nearly everywhere and showing it off. Even though gas was beginning to climb in price even if I didn’t have anywhere specific to go I would still just go out driving wherever. To say I was happy to have it back was an understatement. I also spent those weeks fixing numerous small issues on it; new fender beading, correcting play in the steering wheel, and a few electrical problems to name a few. It was in great shape overall but there was room for improvement and my long term goal was to have it looking good enough to enter it into shows and other events. 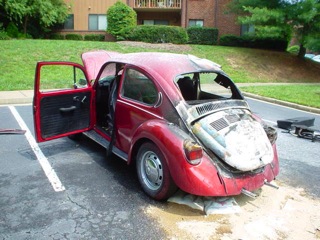 The Bug almost immediately after the fire department had arrived and put out the fire.

All those plans were dashed however on Saturday June 26, 2004 when tragedy struck. Earlier in the day I had washed and waxed both cars and that afternoon went to move them back to their normal spots in front of the building. (I was living in my parents’ condo at the time.) I turned the key on the Bug and it didn’t want to start. About the time I noticed that the accelerator had no resistance I also noticed smoke was coming into the car. I got out and saw more pouring out from the decklid. I reached inside the Bug, grabbed the small fire extinguisher and made a vain attempt to put the flames out. When that failed to do anything I pulled out my cell phone and eventually reached a 911 operator that dispatched the fire department. By the time they arrived the heat had melted the rear window seal and the window had blown out so when they turned on the water the car was flooded in addition to putting the fire out. When the flat bed truck arrived to tow it away the driver tilted the bed back at an angle and water flowed from the car and off the truck like a waterfall. As I watched the Bug being taken away I wasn’t sure what exactly the future held for it but I vowed that one day she would drive again.


To view more photos of the fire’s damage click here.