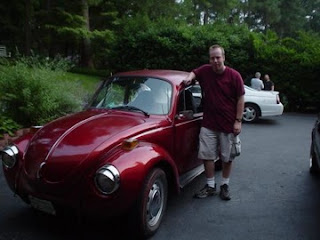 I’m Jeff. That’s me above with the Bug a few days before it caught fire in 2004. Counting the Bug I’ve owned seven Volkswagens of various models since I started driving in 1997 along with a Toyota Corolla since 2012. Ten months out of the year I’m an Instructional Technology Resource Teacher (ITRT) splitting my time between a middle and high school. I live with my wife Jenny (who puts up with all of this), our sons Matthew and Zach, a lovable but dimwitted Cocker Spaniel, an ever snoring Pug, and two cats in Sandston, Virginia. (Just outside Richmond.)

I’ve tossed around the idea of building this site for years; pretty much ever since the Bug originally caught fire. I was inspired by The Bug Shop, a site that charted the restoration of a ’57 Beetle as well as containing technical information that I learned a lot from reading. Eventually over summer vacation in 2008 I finally got around to registering the domain and setting up the site.


As for where “Y73 Bug” came from - When I first got the car in 1997 I got a personalized license plate that read “VDUBBIN.” In 1999 when all the talk was about the Y2K Bug the inspiration hit me that since I had a ’73 Beetle I should get license plates that said “Y73 Bug”. I don’t quite know how many people will still get the reference nowadays but I’m sticking with it.