“Sentimental value is a strong thing and I’ll be damned if I’m going to give this car up without a fight.”
-Line from blog entry detailing the fire the night the Bug died. 6/26/04 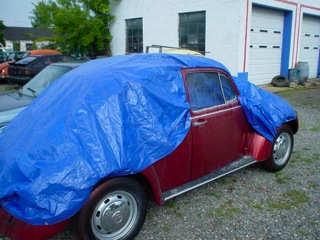 The Bug sitting at VW Motor Rebuilders the evening of the fire.

Immediately following the fire I had the Bug towed to VW Motor Rebuilders on Route 1 in Ashland, VA as I’d had every car I’d ever owned worked on there and figured it would buy me a few days time to figure out where to go from there. Within a few days a friend in RichmondDubs had offered me a spot in his driveway to work on it. It stayed there for a few weeks where with the help of other members of R-Dubs I got the water soaked and soot ruined interior ripped out, the engine dropped out, the paint around the rear end sanded down, and an initial coat of primer applied to keep it from rusting. 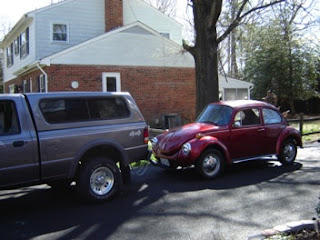 The Bug attached by tow bar to my dad’s Ford Ranger about to be moved to a different storage spot.

From there I moved it to the home of one of my fraternity brothers in their newly purchased house in south Richmond. It stayed there wrapped up for the most part for a few months getting more water logged when Hurricane Gaston swept through Richmond in late August 2004 and the driveway of the house was flooded. In December of that year it moved again to my aunt’s house in Chesterfield where again it stayed wrapped up through the first winter until around May of 2005 when yet again it moved to my mom’s cousin’s house in Hanover County. Here it stayed in a small barn as well as being wrapped up. While it was there I had a chance to do a thorough cleaning on it (with my then girlfriend/now wife getting the windows that I thought were permanently covered in soot of it clean and sparkly as well as spraying POR15 in the air vents under the rear window, an area I was very concerned about rusting. In March 2006 it moved again this time to the back field of my coworker who as it turned out lived not far from the house we eventually bought. Again it was wrapped up and this time had a horse that my coworker owned standing guard to keep out any unwanted visitors. 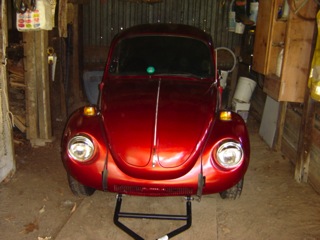 The Bug stored in a small barn at the home of my mom’s cousin. Summer 2005.

In the later summer of 2006 Jenny and I (joined at that point by our son Matthew) began searching for a house of our own. The first time we met our real estate agent we told her that any house we ended up buying needed to have a nice kitchen for Jenny, a garage large enough for two Bugs for me, and be in a decent area. Everything else was negotiable. After looking at a half dozen or so houses we found “the one” and within a month closed on it and moved in. On October 1st of that year my Bugs finally arrived in their new home and the long awaited restoration was set to begin. 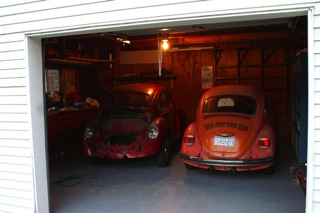 “Both Bugs now sleep soundly side by side in the garage. I’ve waited so long for this moment.”
-Line from blog entry the night I brought the Bugs home after moving into our house. October 1, 2006